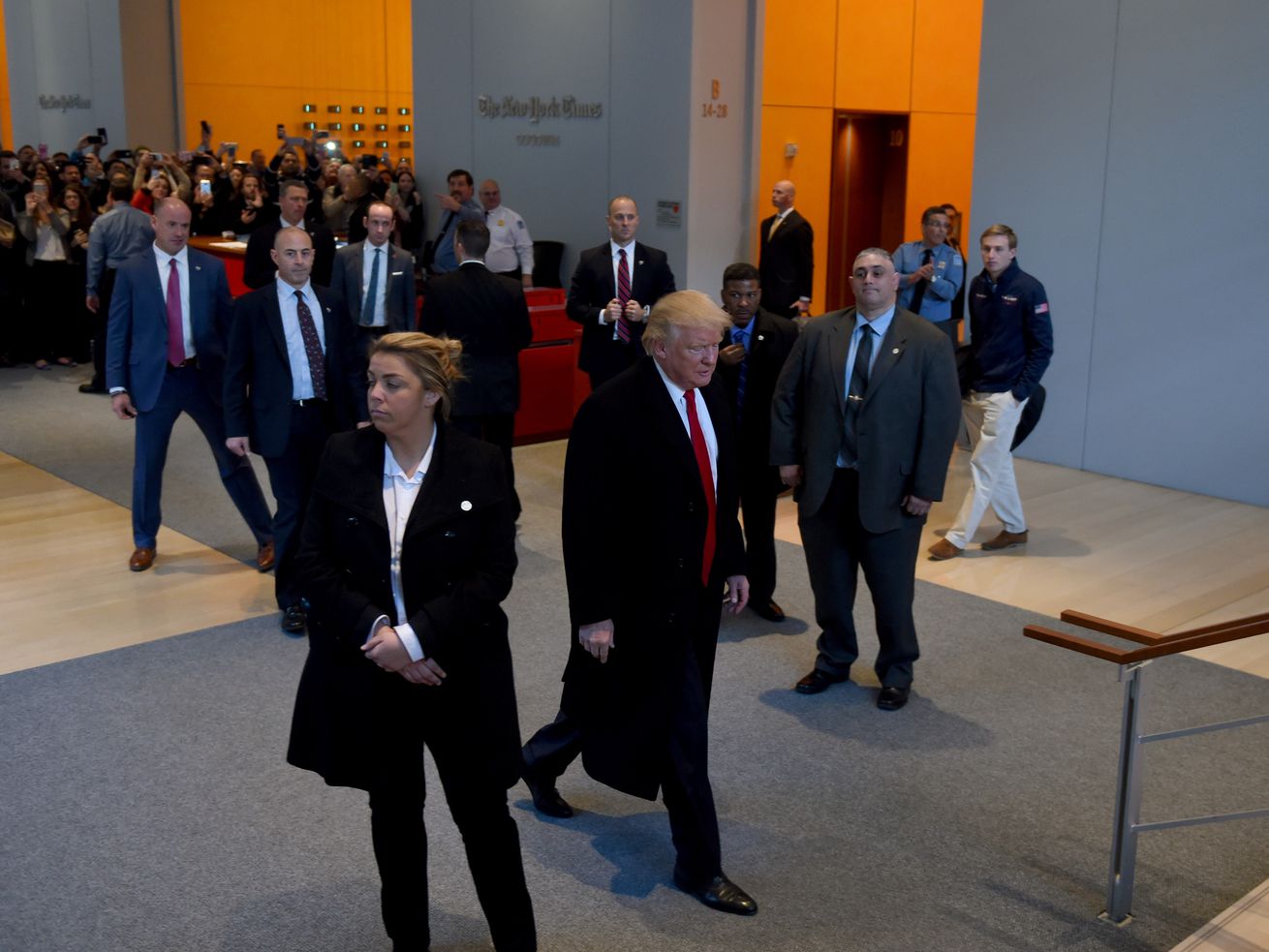 Donald Trump visited the New York Times after winning the US presidential election in November 2016. | Timothy A. Clary/AFP via Getty Images

People spent the summer freaking out and subscribing to the paper of record.

We are living, the cliche goes, in unprecedented times. The New York Times, however, seems to be in a very familiar Groundhog Day scenario: The news goes nuts, and more people subscribe to the New York Times.

That’s what happened this summer and fall when the country was consumed with a pandemic, a presidential race, and a reckoning over racial injustice: Through July, August, and September of this year, the Times added close to 400,000 subscribers; it has added 2 million over the last year.

It’s the best performance the Times has ever had in that timespan. And it is unreservedly good news for the Times, which now has 7 million subscribers and says it is confident it will soon get to 10 million.

It is also, sadly, not useful news for the rest of the news business, which even as the Times thrives is struggling to scare up revenue and hang on to newsroom resources, making it difficult to provide crucial information in a crucial period for the nation.

But back to the Times for now: Thursday’s numbers also provide the paper with another answer to the question it has been facing since Donald Trump got elected and its subscription numbers soared: What happens when the “Trump bump” goes away? The Times answer: Our subscribers stick around, and we add new subscribers.

But the Times is still going to get asked versions of that question. The can-you-believe-what-just-happened pace of news has to slow down eventually, right?

It’s not an academic question. Because for years now, the Times has been more dependent on its subscribers, instead of advertisers, for its revenue.

That’s a result of an intentional strategy: The Times put up an online paywall in 2011 and started aggressively marketing digital-only subscriptions to a new generation of readers. And it’s also the result of industry trends: Advertising-based businesses other than Google and Facebook were having a hard time well before the pandemic.

You can see the challenge of running an ad business in the Times’s quarterly results today as well: The Times’s print ads and digital ads both plummeted, and its overall ad revenue dropped 30 percent compared to the same period a year ago.

The Times says some of the drop is because of the pandemic, which hurt most ad-based businesses (again, with the exception of the Facebook/Google duopoly). But even though advertisers have started to spend again in the fall, the Times doesn’t think its ad business will get better: It’s predicting another 30 percent drop for the next three months.

But the Times insists that it’s prepared to thrive in a world that isn’t completely bonkers, whenever that happens.

“We’re … not reliant on any single story or topic to drive our growth,” CEO Meredith Kopit Levien told investors today. “It’s worth noting that over time, the model is becoming more resilient to big swings in the news cycle.” That is: Levien is saying the Times will keep growing its subscriber business when we get through the election and the pandemic.

All of which should make the Times a model for the news business. But it’s not. The Times stands nearly alone as an example of a paper that has trained customers to pay for it online while weaning itself off of ad revenue.

The Wall Street Journal and the Washington Post are also in decent shape, for different reasons: The WSJ has a longstanding subscription business, which relies on investors and businesses; the Post is owned by the wealthiest man on earth. And a variety of niche publications, like The Information (tech business news) and The Athletic (sports news) are signing up paying customers, too. But for news publishers in between — that is, pretty much everyone else — that model hasn’t worked, which means we’re seeing a grim cycle of declining revenue, which leads to fewer resources, which leads to fewer subscribers. That’s bad news for everyone.

Is the carbon footprint of AI too big?