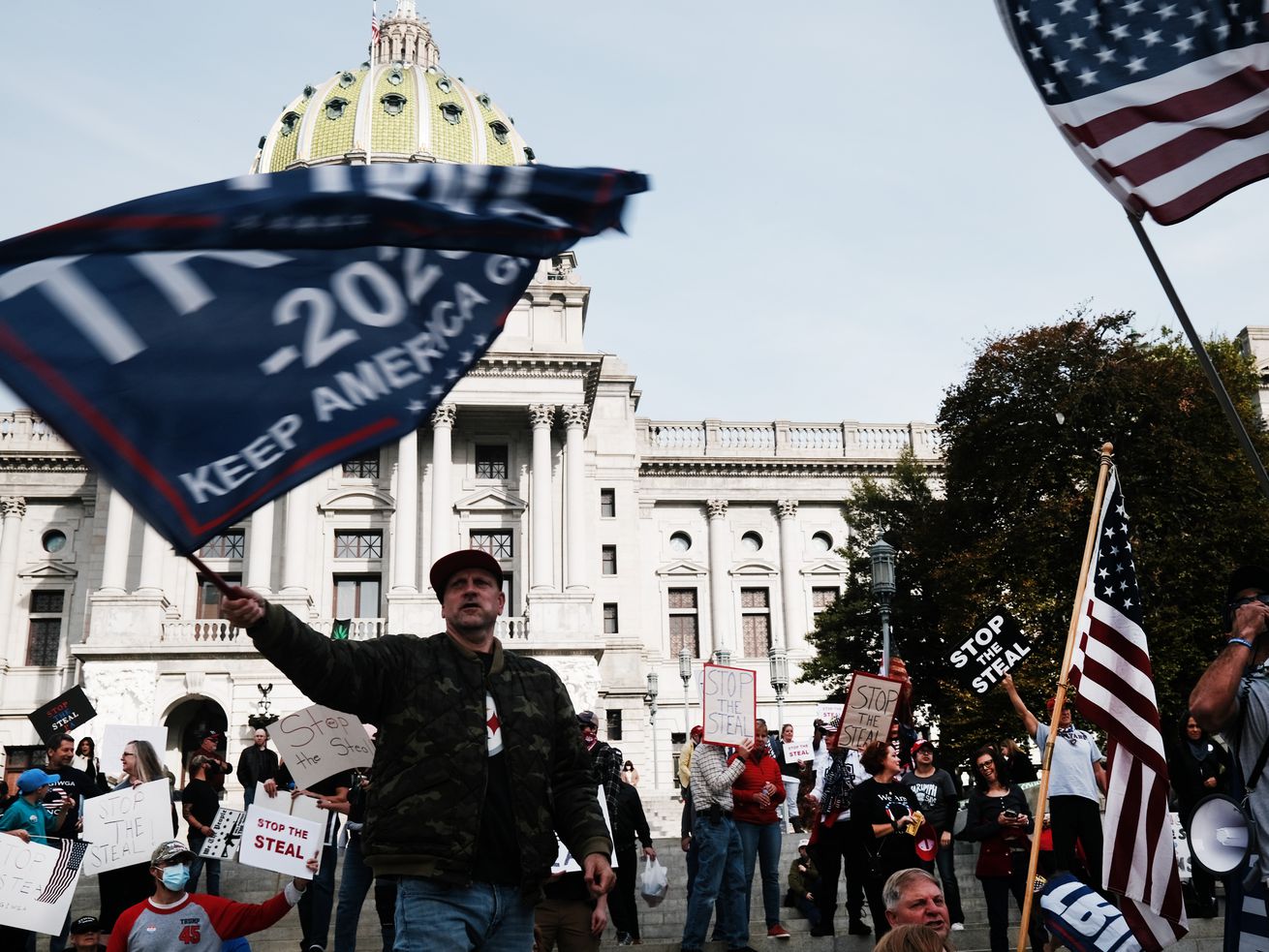 Pro-Trump protesters in Pennsylvania are calling for the state to stop counting votes based on unproven assertions of fraud. | Spencer Platt/Getty Images

Stop the Steal gained more than 350,000 members on Facebook in less than a day.

Facebook took down a massive group tied to Republican operatives where people were spreading misinformation about the 2020 presidential election process and calling for violence. While votes are still being counted in key battleground states, President Trump and his campaign are insisting — without proof — that Democrats are stealing the election through mass voter fraud.

The group, called “Stop the Steal,” gained more than 350,000 members in less than 24 hours starting on Wednesday before it was taken down on Thursday afternoon. Members were convening around unproven allegations of mass ballot-counting fraud, such as the “Sharpiegate” ballot hoax, and posting incitements to violence. While some misinformation researchers applauded Facebook for the move, conservative groups behind it were quick to accuse the company of political censorship. Already, new “Stop the Steal” groups have formed since this one was taken down, raising the question of whether Facebook will be able to consistently moderate groups like this that violate its rules.

Facebook explained its reasoning for taking down the group in a statement to Recode: “In line with the exceptional measures that we are taking during this period of heightened tension, we have removed the Group ‘Stop the Steal,’ which was creating real-world events. The group was organized around the delegitimization of the election process, and we saw worrying calls for violence from some members of the group.”

Before Facebook removed the group, Recode reviewed the group’s page and found dozens of examples of blatant misinformation about voting at the top of its recent posts section — such as the debunked notion that there was an influx of over a million last-minute mail-in ballots for Joe Biden, and the baseless conspiracy theory that Democrats were using the coronavirus as a “Trojan horse” to increase mail-in voting. According to screenshots from the Center for Countering Digital Hate nonprofit, some members were also directly inciting violence, posting comments like, “Time to clean the guns, time to hit the streets.” The group had also organized several Facebook events supporting real-life protests on Thursday in areas such as Philadelphia, where mail-in ballots are still being counted. Recent protests in battleground states like Michigan and Arizona have disrupted, or attempted to disrupt, vote-counting procedures.

The “Stop the Steal” group had ties to Republican digital consultants and Tea Party activists, including people involved in Steve Bannon’s “Build the Wall” project, according to reporting from Mother Jones and The Daily Beast. A conservative political organization called Women for Trump was listed as the group’s official creator on its page.

The “Stop the Steal” hashtag has been used to spread false statements about the voting process around the election, including about alleged voter fraud in battleground states like Pennsylvania. Previously, the campaign was linked to former Trump adviser Roger Stone.

Conservatives on social media immediately condemned Facebook’s move to shut down the group, with some asking whether Facebook ever took such an aggressive stance against Black Lives Matter protests organized on Facebook.

On the other side of the aisle, some commended Facebook for taking quick action to take the group down, even if they thought the company could have acted faster.

“It’s amazing that they let it stay up for so long,” said Imran Ahmed, CEO of Center for Countering Digital Hate. The Stop the Steal group remained up for around 24 hours. “This goes to show that the long-term solution is going to require a sea change in the way that groups can be set up and the kind of content and accountability mechanisms that are there.”

In the past, Facebook groups have been connected to politically motivated violence, such as the recent Kenosha Guard page which rallied armed militia groups to show up on the streets of Kenosha, Wisconsin, during Black Lives Matter protests. A 17-year-old shooter killed two protesters in Kenosha; he was not a member of the Kenosha Guard page but was a member of other militia groups on Facebook that urged members to attend protests. In the months leading up to the election, Facebook began encouraging users to join more groups, though it later turned off its recommendations for political groups just days before the election.

Joan Donovan, who is the research director at Harvard University’s Shorenstein Center on Media, Politics and Public Policy, said that leftist groups on Facebook have been taken down in the past for violent rhetoric as well, such as protest pages linked to the Occupy movement. But people aren’t as aware of that, in part because of the opacity around Facebook’s enforcement decisions.

“Because Facebook has not set public expectations clearly about what will be moderated in this election cycle, people are experiencing content moderation as censorship,” said Donovan.

Facebook’s reaction to the Stop the Steal group is a sign that it’s starting to move faster to shut down people on its platform who are organizing in ways that could lead to violence. But for many, it’s still unclear what crosses that line — especially before the rhetoric escalates to dangerous levels. In this case, hundreds of thousands of people were already exposed to conspiracy theories and misinformation, and possibly encouraged to commit violence because of it, before Facebook acted. At a time when the country is so deeply divided over the fundamentals of our democracy, it would help if the company provided greater transparency into its decision-making processes around political speech.

The 8 Best Drones for Every Budget