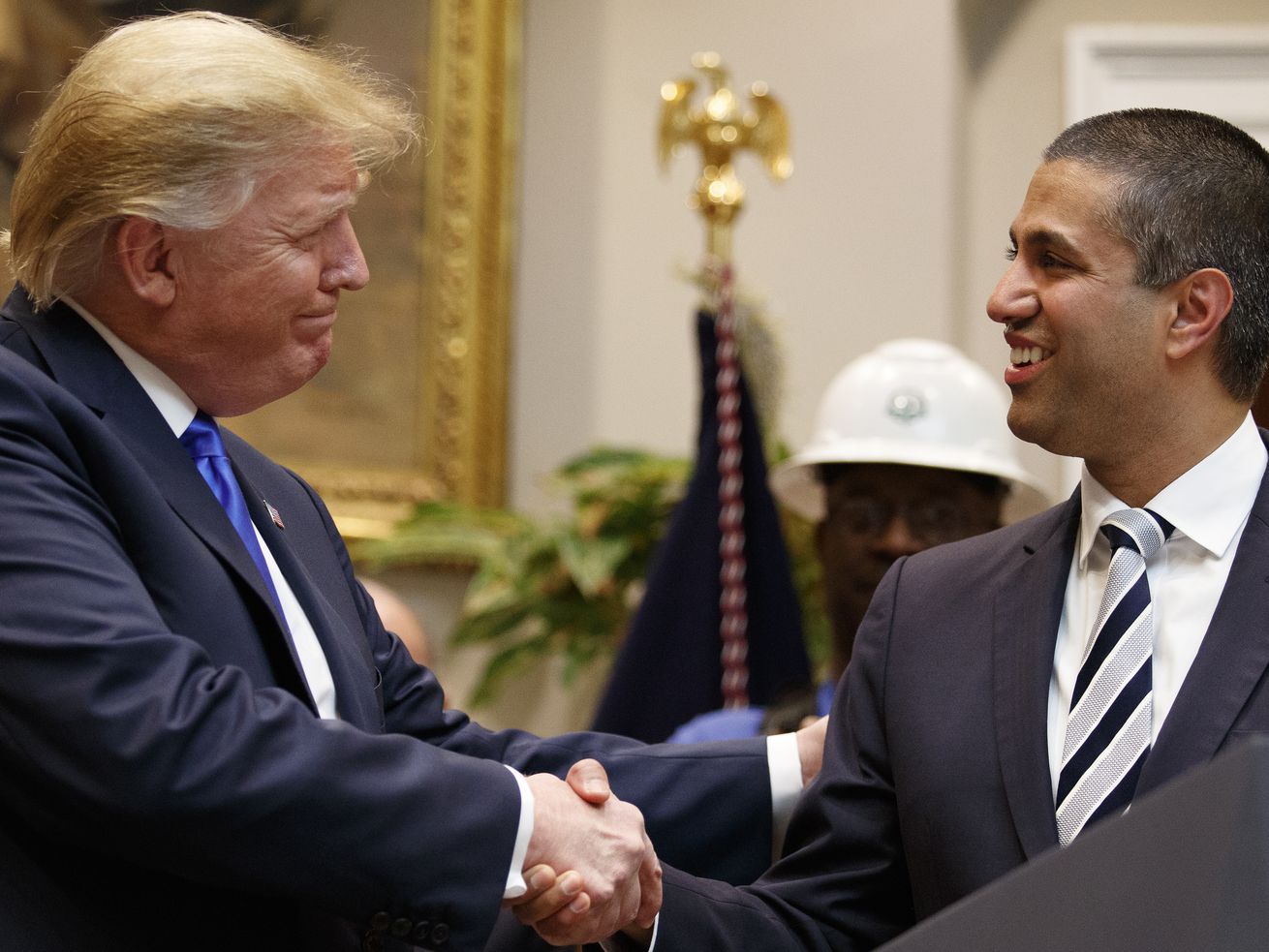 President Donald Trump shakes the hand of FCC Chair Ajit Pai before delivering remarks on 5G deployment in the US on April 12, 2019, in Washington, DC. | Tom Brenner/Getty Images

Trump wants the FCC to help him rewrite Section 230, the law that protects the internet as we know it. But the agency isn’t that powerful.

The Trump administration is once again trying to force social media platforms to do its bidding. This time, the Federal Communications Commission (FCC) has been tapped to use a law called Section 230 to prevent websites from moderating content in a way that many conservatives believe is biased against them. Despite the law being designed to prevent FCC intervention — and the FCC itself using that as justification not to regulate the internet just a few years ago — it appears the agency is going to try.

This comes after Trump and many conservatives have called for Twitter and Facebook to be punished after the platforms suppressed links to the New York Post’s questionably sourced story about Hunter Biden. This prompted another all-caps demand from Trump to repeal Section 230 and the Republican-led Senate to prepare to subpoena Twitter CEO Jack Dorsey, accusing the company of election interference.

The very next day, FCC Chairman Ajit Pai announced that his agency would “move forward with a rulemaking to clarify” the meaning of Section 230, which gives internet platforms like Facebook and Twitter immunity from lawsuits over content their users provide. That is to say, if someone defames you in a tweet, you can sue the Twitter user but not Twitter itself. This 25-year-old law is what allows websites that rely on third-party content to exist at all. It also allows those sites to moderate that content as they see fit, which has been a source of ire for conservatives who believe they are being censored when Facebook bans them, YouTube demonetizes them, or Twitter appends fact-checks to their tweets.

Trump has been particularly upset about this in recent months, as platforms have cracked down on the misinformation he spreads. In May, he went so far as to issue an executive order calling for the FCC to come up with rules that would prevent websites from moderating content based on a perceived anti-conservative bias, which is the basis for the FCC’s actions now.

The FCC isn’t the thought police

But legal experts — former FCC commissioners and staff among them — don’t think the FCC is allowed to regulate the internet in this way.

“I don’t think the FCC has the authority to be thought police over platforms,” former FCC Chairman Tom Wheeler, Pai’s predecessor and no fan of Section 230 himself, told Recode.

Wheeler added: “The Trump administration practices government by performance. They come out and they beat their chests and they say we’re gonna do this on 230, and we’re gonna do that on the digital divide. But it’s chest-pounding, not policy. There’s a difference between showbiz and substance.”

Pai said in his statement that the FCC’s general counsel, Thomas M. Johnson Jr., told him that the FCC has the legal authority to interpret Section 230 but didn’t elaborate on how. Johnson did not respond to a request for comment from Recode on how he reached that conclusion. When asked the same question, FCC spokesperson Brian Hart told Recode, “We don’t have anything to add at this point.”

It’s likely the FCC will use the justification presented by the National Telecommunications and Information Administration (NTIA) in its petition to the FCC. The NTIA cited Section 201(b) of the Communications Decency Act, of which Section 230 is part, which says that the FCC may “prescribe such rules and regulations as may be necessary in the public interest to carry out this chapter.” But, as experts have pointed out, Section 201(b), as written, applies only to common carriers — that is, entities that provide “telecommunications services,” like phone companies — and not internet service providers (ISPs) like Verizon or Comcast.

Harold Feld, senior vice president at open internet advocacy group Public Knowledge, said in 2019 — when an executive order commanding the FCC to regulate Section 230 was just a rumor — that this was both a “bad idea” and that he couldn’t see any way that the FCC had the authority to do it.

“The FCC cannot rewrite acts of Congress to suit its whims,” Kate Ruane, senior legislative counsel at the American Civil Liberties Union, said in a statement. “Section 230 is critical to protecting free speech online and the FCC has no authority to change it, especially not in ways that will undermine free expression.”

“There’s nothing in Section 230 of the Communications Decency Act that gives the FCC authority either to interpret it or, even more importantly, set rules,” said Gigi Sohn, a distinguished fellow at the Georgetown Institute for Technology & Law Policy who was counselor to Wheeler from 2013 to 2016. “In fact, the legislative history is completely to the contrary.”

The law’s bipartisan co-authors, Sen. Ron Wyden and former Rep. Chris Cox, have said they intentionally wrote the law to prevent the FCC from having this authority in the first place.

The FCC does not have the authority to rewrite the law, and Ajit Pai can’t appoint himself commissioner of the speech police. Read my comments with former-Rep. Cox on why this process is so deeply flawed. https://t.co/7JxSSKNmRR

Back in 1995, when the Communications Decency Act was being considered, there was some debate over what the FCC’s role in regulating the internet should be. Wyden and Cox thought FCC oversight would be a barrier to internet innovation and development.

He continued: “If we regulate the internet at the FCC, that will freeze or at least slow down technology. It will threaten the future of the internet.”

That’s a vision that Pai himself agreed with back in 2017 when the FCC, under his chairmanship, repealed net neutrality, citing Section 230 as justification for taking a “light-touch approach” to “burdensome regulation that stifles innovation and deters investment.”

Because of this, Sohn said, the FCC would essentially have to reverse its own decision — one that has become emblematic of the FCC’s anti-regulatory approach under Pai and the Trump administration — in order to make the case that it has any authority over Section 230 at all.

If the FCC does decide to try to make rules for Section 230, it will need the majority of the five-person commission to agree on them. Pai is clearly in favor, and fellow commissioner Brendan Carr is, too. Democratic commissioners Geoffrey Starks and Jessica Rosenworcel are not. That leaves the fifth commissioner as the deciding vote. Right now, that’s Republican Michael O’Rielly, who has signaled that he is not in favor of regulating Section 230 in this way. But it could soon be Nathan Simington, who Trump nominated last month to replace O’Rielly. And Simington appears to be in favor of regulating Section 230 through the FCC, which is likely part of why Trump nominated him in the first place.

After that, it will probably take several weeks or months to issue those rules. It’s already taken nearly five months between Trump’s executive order calling for its action for the FCC to get to this point. Depending on how the election goes, Trump may no longer be in office and the Democrats could control both branches of the legislature, in which case executive orders and FCC interpretations under the Trump administration will almost certainly come to an end.

But let’s say that Trump does win the election — what then? There’s still no guarantee that what Trump wants to happen will happen, or that it would happen anytime soon. Congress can overturn FCC rules, and it likely would if it has a Democratic majority in both houses. While Democrats have their own problems with Section 230, those have mostly focused on eliminating immunity protections for websites that feature child sex trafficking and child sexual abuse images. Changing Section 230’s content moderation policies has become a partisan issue — Republicans are the ones writing bill after bill opposing Section 230 and decrying perceived censorship on social media platforms — and that makes it much less likely that Democrats will pick up the Republicans’ cause.

If Congress doesn’t reject the FCC’s rules, then it’ll be up to the courts, which has become the norm for an administration that refuses to accede to laws until it absolutely has to. A number of organizations already have sued the Trump administration over the executive order, citing First Amendment and regulatory policy violations. And that litigation will likely come with injunctions that prevent any regulations from taking effect until the courts can rule on them.

“This is going to be tied up in litigation forever and a day,” Sohn said.

Courts have typically ruled in Section 230’s favor, but there’s at least one judge who seems to feel differently: Supreme Court Justice Clarence Thomas recently said that he thinks courts have gotten Section 230 wrong, and the protection from lawsuits its provides has been granted too liberally. But he said this in the court’s denial to hear a case about Section 230, which indicates that the majority of justices aren’t interested in reconsidering Section 230 right now.

So how likely is it that the FCC will be the one to make Trump’s dreams of an internet that doesn’t put fact-checks on his tweets come true? Not very, and certainly not anytime soon. But the administration has already gotten its way just by threatening to do so: Twitter changed its rules a few hours after Pai issued his statement. The next day, it allowed the Post story on the platform.

How election results get certified