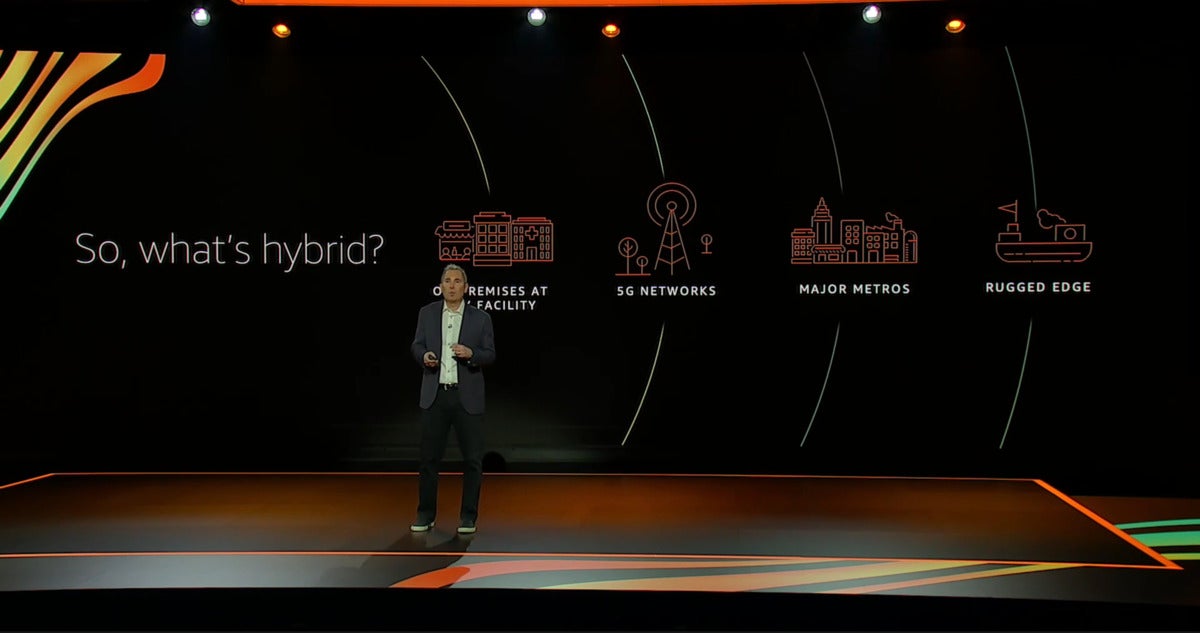 Amazon Web Services made a set of announcements during the first day of its AWS re:Invent conference this week aimed at helping customers ease the deployment and management of container-based and serverless applications both on premises and in the AWS cloud, but stopped short of explicitly making it easier to run alongside rival clouds.

In this respect there were three major announcements from AWS CEO Andy Jassy’s virtual re:Invent keynote on Tuesday, December 1. The first two, Amazon EKS Anywhere and Amazon ECS Anywhere, are aimed at helping customers run containerized workloads seamlessly on premises and in the cloud.

[ Also on InfoWorld: Why AWS leads in the cloud ]

Jassy acknowledged that customers often use different flavors of these managed container services for different workloads and in different teams depending on their skill sets and unique requirements.

With the Anywhere options, AWS is looking to make it easier to run EKS and ECS both on premises and in the cloud, while alleviating common management headaches by allowing developers to use the same APIs and cluster configurations for both types of workloads. The EKS Anywhere distribution is also being open sourced to align it with its Kubernetes underpinning.

The third announcement in this space was the public preview of AWS Proton, a new service that allows developer teams to manage AWS infrastructure provisioning and code deployments for both serverless and container-based applications using a set of templates.

These centrally managed templates will define and configure everything from cloud resources to the CI/CD pipeline for testing and deployment, with observability on top. Developers can choose from a set of Proton templates for simple deployment, with monitoring and alerts built-in. Proton also identifies downstream dependencies to alert the relevant teams of changes, upgrade requirements, and rollbacks. Proton will support on-premises workloads through EKS Anywhere and ECS Anywhere as they come online for customers.

Towards the end of his keynote Jassy reiterated his view that most companies will eventually run predominantly in the cloud, but it will take time to get there. Hence the need for hybrid capabilities—such as AWS Outposts, EKS and ECS Anywhere, and AWS Direct Connect—as a necessary on-ramp for enterprise customers.

“We think of hybrid infrastructure as including the cloud alongside other edge nodes, including on-premises data centers. Customers want the same APIs, control plane, tools, and hardware they are used to using in AWS regions. Effectively they want us to distribute AWS to these various edge nodes,” Jassy said.

Many enterprise customers want to run different workloads with different cloud providers depending on their specific needs. Further, many of these customers want to avoid becoming too dependent on any one cloud. For example, 37% of respondents to the IDG Cloud Computing Survey this year cited the desire to avoid vendor lock-in as one of their primary goals.

Ahead of the event it was rumored that AWS would go further in launching a broader multicloud management option which would allow customers to manage Kubernetes workloads running on rival Google Cloud Platform and Microsoft Azure cloud infrastructure, much like Google Cloud is trying to do with Anthos and Microsoft with Azure Arc, or IBM’s suite of options via its newly acquired Red Hat assets.

This didn’t happen on day one of re:Invent.

That doesn’t mean EKS Anywhere couldn’t be used to traverse various environments. As InfoWorld contributor and AWS employee Matt Asay tweeted, “Could you run EKS Distro on another cloud? Yep.”

“Customers will be able to run EKS Anywhere on any customer-managed infrastructure. We are still working on the specific infrastructure types that we will support at GA,” Deepak Singh, AWS VP of compute services, told InfoWorld.

Over the three hours of Jassy’s keynote there were many other announcements, including those around databases, which also focused on customers’ desires for portability. AWS Glue Elastic Views was announced as a means for simple data replication across various data stores, while the open source Babelfish for Aurora PostgreSQL offers a way to run SQL Server applications on Aurora PostgreSQL.

[ Also on InfoWorld: How to make the most of the AWS free tier ]

Jassy also spent a lot of time focusing on the vendor’s continued work around more price performant custom silicon. He first reflected on the success of its Graviton2 and Inferentia chips announced last year, the latter of which are optimized for machine learning workloads and now run most of the company’s Alexa workloads.

How to Use Running Apps to Hit the Road